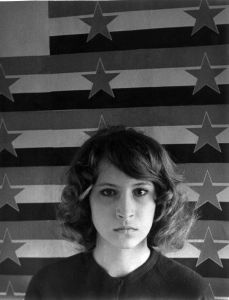 Coinciding with The Exhibition: The World Goes Pop at Tate Modern this autumn, this event brings together curator Lina Džuverović (University of Reading) and artists Martha Rosler and Sanja Iveković to critically explore how pop art of the 1960s and 1970s became a global language of subversion, considering its legacy today. Working in very different socio-political contexts in that period, each has turned to pop as a form of reaction or protest to the established norms, through happenings, performance, or appropriation of media.

This discussion offers a unique opportunity to hear first-hand accounts of what pop was and meant to those who lived it outside of the mainstream story. Chaired by Frances Morris, Director of Collection and International Art, Tate.

Sanja Iveković was born in Zagreb, Croatia, where she currently lives and works. She was raised in Socialist Federal Republic of Yugoslavia and belongs to the artistic generation covered by the umbrella term New Art Practice that emerged after ’68. Iveković continuously contested the role of art in society through a wide range of media, at the points of intersection between gender, nation and class. Her work from the 1990s deals with the collapse of socialist regimes and the consequences of the triumph of capitalism and the market economy over living conditions, particularly of women.

Martha Rosler works across a range of media, including photography, video, writing, performance, sculpture, and installation, often addressing matters of the public sphere, especially as they affect women.

Rosler has for many years produced works on war and the ‘national security climate’, connecting everyday experiences at home with the conduct of war abroad — most famously in ‘House Beautiful: Bringing the War Home, originally made as a response to the war in Vietnam in the late 1960s.

Rosler has had numerous solo exhibitions at museums and galleries internationally. In 2012 she presented her performance and installation Meta-Monumental Garage Sale at MoMA, New York.

Lina Džuverović is an independent curator and Lecturer at the Art Department, Reading University. She is also a PhD candidate (AHRC CDA) at Tate and the Royal College of Art, researching pop art in the former Yugoslavia, as part of The EY Exhibition: The World Goes Pop. She is currently guest-curating the exhibition Monuments Should Not Be Trusted for Nottingham Contemporary (January 2016). Previously Lina was Artistic Director at Calvert 22 Foundation and Executive Director and co-founder of Electra, a London-based contemporary art organization.

With support from Art in Embassies and Mondrian London at Sea Containers.