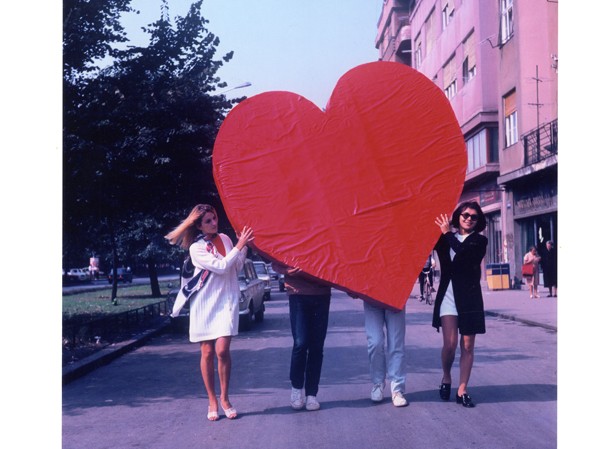 Monuments Should Not Be Trusted brings together over 30 leading artists and groups from the “golden years” of the Socialist Federal Republic of Yugoslavia – the period between the early 1960s and the mid 1980s.

Over 100 artworks and artefacts illuminate the key contradictions of this single party state – built after WWII on socialist principles, yet immersed in “utopian consumerism.” This is the first time in the UK that the art of this period, which has attracted increasing attention, has been shown in the context of the social, economic and political conditions that gave rise to it. It draws on new and innovative research on this period, and features many of its most celebrated artists.

The exhibition begins with the rise of consumerism, midway through President Josip Broz Tito’s 37 year presidency, and ends a few years after his death in 1980. As well as artists’ works in moving image, collage, photography, sculpture and painting, the exhibition encompasses music, TV clips and fascinating artefacts, such as gifts made by workers for President Tito’s birthday, and relay batons which were carried across the country and ceremonially presented to him.

Tito was the architect of the socialist federation of Yugoslavia that lasted from 1943 – 1991/2, Built on the legacy of the anti-fascist resistance movement, it brought together six nations that maintained a peaceful co-existence during this period. Tito cut ties with the Soviet Union after a dispute with Stalin in 1948. In 1951 Yugoslavia developed “self-management” within a previously state-run economy, establishing workplace democracy and profit-sharing. Along with Nehru of India, Nasser of Egypt, Nkrumah of Ghana and Sukharno of Indonesia, Tito founded the Non-Aligned Movement in 1961. It grew to 120 members, mainly from the Third World.

Yugoslavia had few restrictions on travel, meaning that its citizens – and artists – were far more open to outside influences than their Communist neighbours. During the 1960s artists turned to conceptual art, known as new art practice. Artists working around the new Student Cultural Centres in Ljubljana, Zagreb and Belgrade drew on Pop Art, pop music and hippy culture to critique their society. Black Wave film – an outspoken critic of the Yugoslav system – also appeared at this time.

Monuments Should Not be Trusted is a thematic overview of the complexities of Yugoslav art and culture. Four key themes – Public Space and the Presence of Tito, Socialism and Class Difference, Comradess Superwoman, and Utopian Consumerism and Subcultures – are explored in Nottingham Contemporary’s four galleries.

Public Space and the Presence of Tito reflects upon the Yugoslav peoples’ complex emotional relationship to Tito, a President with an unlimited term. Censorship “from above”, was replaced by censorship “from within”.  Many of the artefacts shown in this gallery are from President Tito’s own collection, now in the Museum of Yugoslav History in Belgrade, Serbia, the museum that comprises Tito’s mausoleum, and many thousands of objects from his private collection.

Socialism and Class Difference looks at both labour and the role of the artist during the Golden Period. By the late 1970s Yugoslavia was suffering high unemployment that threatened its socialist ideals. Student protests and underlying ethnic tensions are also explored.

Comrades Superwoman addresses the complex issues faced by women in Yugoslavia, where new equal rights legislation co-existed with patriarchy in the private sphere. The growth of magazines, film and advertising also introduced a new role for women – the sex symbol.

Utopian Consumerism and Subcultures showcases the explosion of punk and psychedelia that appropriated popular culture, often humorously. These eclectic influences and media experiments, expressed in music, video, screen printing and collage, culminated in the emergence of Yugoslavia’s New Wave, the country’s most definitive form of pop music, represented here in 80s music videos and TV programmes.

Monuments Should Not Be Trusted is the largest ever exhibition of Yugoslav art in the UK. Its title is taken from a work by the Yugoslavian film-maker Dusan Makavejev.

Feeding off Contradiction: Self Managed Socialism in Focus
Symposium, 16 Jan 2016

This symposium brings together leading artists and academics in an exploration of the core themes that underpin the Monuments Should Not Be Trusted exhibition. The conference centers the principle of self-management (autogestion), an economic and political system which was central to Yugoslav socialism, placing a certain amount of decision making in the hands of the workers themselves. The conference asks how self-management could have been (and whether it was) applied to artistic practice, and what were its potentialities and its failures.
Can some of the working methods of self-management be applied to artistic practice today, in a different political system, in a different geography, over thirty years later? What would such initiatives entail?
The symposium also explores different forms of critique of Yugoslav self-management. Presentations include a close reading of Black Wave films, a discussion of the student protests in 1968, as well a closer look at New Art Practice and the emergence of punk communities as forms of resistance.
Speakers include: Milica Tomić, David Crowley, Zoran Popović, Sanja Iveković, Branislav Dimitrijević, Antonia Majaca, Lina Džuverović and Zoran Pantelić.
1pm-6pm
Free, The Space