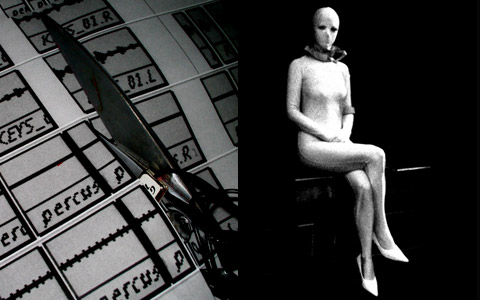 Christine Ellison, Lecturer in Fine Art, will be performing at  Noise, Affect, Politics Conference at University of Salford, July 1-3 2010

If there are people that are dumb enough to use Metallica to interrogate prisoners, you’re forgetting about all the music that’s to the left of us. I can name 30 Norwegian death metal bands that would make Metallica sound like Simon and Garfunkel. – Lars Ulrich

… this music can put a human being in a trance like state and deprive it of the sneaking feeling of existing, ’cos music is bigger than words and wider than pictures… if the stars had a sound it would sound like this.” – Mogwai, “Yes! I Am a Long Way from Home.

Noise Annoys. Is it not a banal fact of modern, urban existence that one person’s preferred sonic environment is another’s irritating, unwelcome noise – whether in the high-rise apartment, on public transport or the street, or almost anywhere else? The contingent soundscape of jack-hammers and pneumatic drills, mobile phone chatter, car sirens and alarms, sound leakage from nightclubs and bars and – moving into the suburbs – lawn-mowers and amateur renovation projects, neighbouring kids and dogs, represents a near-constant aural assault. As a pollutant, noise can legally attain noxious levels; it is both potentially biologically harmful and psychologically detrimental.

But what exactly is noise and what conditions these relative thresholds in which sound crosses over into noise? Or are these more organised and polite sonic phenomena merely varieties of noise that have been tamed and civilised, and yet still contain kernels of the chaotic, anomalous disturbance of primordial noise? As a radical free agent, how is noise channelled, neutralised or enhanced in emergent cityscapes? As a consumable, how is noise – or lack of noise – commodified?

Such questions are particularly applicable to contemporary forms of music which, based as they are on a variety of noise-making technical machines, necessarily exist in the interface between chaotic, unpredictable noise and the organised and blended sounds of music and speech. Does modern noise seek to lead us to new, post-secular inscapes (as with psychedelia and shoegazer), or defy the lulling noisescapes of processed background muzak with punitive blasts of disorientating, disorderly noise? And why the cult of noise – in term of both volume and dissonance – in which low cultural practices (metal, moshing) meet those of the avant-garde (atonalism, transcendentalism)?